Obsessed with the Differences in the Super Mario Bros 3 Re-make... 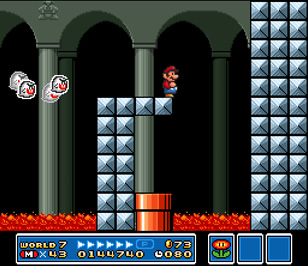 Graphical makeovers were given to the classic Super Mario games when the original "trilogy" was remade for the Super Mario All-Stars version on the SNES. Characters, surfaces and background were all re-textured, along with a few other changes.

Just like when "enhancements" are made to the original Star Wars films, people often get annoyed when certain things are changed in a re-release. I grew up with the original classics, and I've since played every level of Super Mario Bros 3 in the Super Mario All Stars version... Which of course, inspired me to go back and play through the original NES classic...


I'm probably the only one irritated by the fact that the "Secret Toad House" is now blue instead of white in the All-Star remake. Hardcore Mario addicts will remember the secret Toad House as a reward for collecting a set number of coins in the target level in each world.

There was just something about the simple black and white design, appearing like a puff of smoke on the map. So special and mystical... Plus, it matched the monochrome scheme of the coin ship and the card games...


The King's New & Improved Transformations...
In the All-Stars version of the game, the King of every world has been transformed into something different than in the original version... The revised edition featured several retro Mario characters.
View complete album: SMB3 - King Transformations (All Stars version)


Both of these are noteable because the events in Super Mario Bros 3 took place before Super Mario World, meaning in that moment in time, Mario wouldn't have met Yoshi yet...

A welcome change in the re-release is an updated look for Luigi. Instead of just being a green clad Mario, Luigi appears taller and thinner than Mario.. It was a bit unfair that he evolved to be a slightly taller brother in SMB2, only to be essentially a Mario "clone" in the original SMB3.

Upon completing World 7, Mario opens a letter that turns out to be from Bowser Koopa. In the All-Stars version, the Koopa King has personalized stationary paper featuring his ugly mug.
I like this change... Not really sure why. I suppose it makes Bowser seem more vain and scheming.

At the end of the game when Mario rescues the Princess in the original Super Mario Bros 3, he finds her in a small room (one that suspiciously resembles Toad's house...). In the All-Stars version, he locates the Princess in a much larger room. (And suddenly, she's a blonde...)

Graphical enhancements aside, I kinda prefer the confines of the small room... What's hotter than rescuing a princess, and being alone in a tiny, private, secluded location? The scene was set for some hot, Mario on Princess action. In the re-make, he finds her in a big room full of windows. It kinda kills the mood...
Posted by DetErest at 7:46 AM