Been playin' lots of multiplayer Mario Kart lately... The original Mario Kart games were the reason I first got my SNES and N64...

I even found some old videos from Mario Kart Double Dash!! (GameCube) that were intended for the web. I'm sure the tricks were posted, but I don't know if the videos were ever included...
http://www.youtube.com/user/deterest﻿
Posted by DetErest at 5:27 AM No comments: TimeSplitters 2 and TimeSplitters Future Perfect were the only real shooter games that actually met the benchmark set by GoldenEye...

Yet somehow, these underrated games managed to attract only a small cult of followers, as the games avoided mainstream popularity like vampires avoid the sun.
Posted by DetErest at 1:32 AM No comments:

You Only Live Twice... 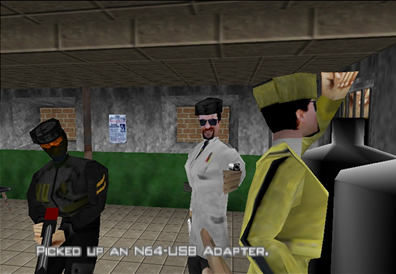 GoldenEye 007 is so unique that countless attempts have been made to duplicate it's success.  Even though the core team members who developed the game didn't expect it would be a hit. They just made something that they had fun playing over and over again, relentlessly tweaking it until they got it right. It's a genuine formula that can't be duplicated by companies that merely have dollar signs in their eyes.

The original GoldenEye 007 game had 20 full missions, with 4 additional maps for Multiplayer... But now that players are making their own levels in the PC  ROM with the GoldenEye Setup Editor (available at GoldenEyeVault.com), there's literally no end to the types of missions or deathmatches that will be created...

This alone was enough for me to decide that an N64-to-USB controller adapter was the way to go. Now I can truly explore the ever-growing, infinite world of GoldenEye ...
Posted by DetErest at 2:27 PM No comments: