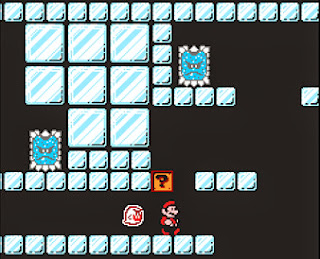 The "traditional" way to complete Super Mario Bros 3 is to stock up on powerups, get a couple warp whistles and jump to the end. This allows the player to skip past the hellish worlds 6 & 7 which can be quite unforgiving.


Taking the most direct route, a seasoned player can beat the game in about 15 minutes...
But battling through every single world and making it to the end is something that most players haven't done...

Read more »
Posted by DetErest at 5:52 PM No comments:

Settle the score with Trevelyan - In record time!

I stumbled upon a really cool GoldenEye 007 video on YouTube...

With a combination of skill and luck, the Cradle mission is conquered in 36 seconds on 00 Agent difficulty.

James Bond picks up a hand grenade (randomly dropped by a guard). Pulling the pin as he chases Alec Trevelyan, the grenade is tossed into Trevelyan's path, and the former MI6 agent is killed in the explosion. You gotta see it to believe it.


Alternatively, another cool video shows the Cradle mission on Agent difficulty using a slightly different method, still finishing the job and getting down to business with Natalya in 34 seconds...


It's on the Japanese version of GoldenEye 007, but still pretty cool.