Anything from the Lost World automatically comes to mind when considering the most challenging levels in Donkey Kong Country 2. Everything you've learned is put to the test, forcing your skills to be sharper and your reflexes quicker than ever before as you explore five mysterious worlds of jungle, fire and ice.

As if the levels themselves weren't difficult enough, each stage contains a bonus level that's easy to miss, and considerably hard to get to. In the Lost World, DK coins are awarded for completing bonus stages instead of Kremcoins.

The big goon Klubba lets you pass into the fabled Lost World areas for fifteen Krem Coins per stage. What a ripoff. I'd kick his ass if it wasn't for that club.

Wonder where all the manufactured tires came from... Not only are you required to bounce along the huge monster tires as they roll over pits of spikes, but the things will also bowl you over and crush you into a wall. Bonus level is snagged relatively easily ; When you find the letter "O", roll off the cliff to the left and perform a mid-air jump into the bonus barrel.

Who doesn't love a snow and ice level? This one's actually pretty tame compared to other Lost World locales. Not too far off the beaten path is a canon ball inside a chest. Carrying the canon ball with you until you meet the Zingers that are guarding the "G" letter, and a bonus room.

Many consider Klobber Karnage to be the most difficult stage in the entire game... Klobbers everywhere, speedy and agressive. The trick is to be quicker than they are, know which ones you can just jump by, and which Klobbers you need to stomp - In order to use their barrels as weapons against the Klobbers waiting ahead... And know that one bad move and they'll bump you into a spike pit.

An easy to miss bonus at the end of the level. Cranky Kong does offer a clue to it, and it is marked with a lone banana.

A bit of precision barrel blasting that takes some practice. The real challenge here is making it to the bonus barrel with both Kongs intact, while avoiding Cat-O-Nine Tails and Kutlass. It's a fairly difficult bonus level, requiring you to navigate a barrel through a narrow thorny bramble maze full of Zingers. After the bonus game, you're automatically sent to the end of the level, and gotta restart from the beginning if you failed the bonus game.

Most players will have the Animal Antics stage near - or at the top of their list for most difficult stages in the entire game. Five segments, each played as a different animal buddy. The bonus is hidden in the part with Squitter the spider, just past the save barrel. Unlike most levels in the lost world, you can retry the bonus if you fail. Helps offset the fact that the rest of the stage is so frustrating.

Navigating Squawks the parrot through the windy bramble maze is when things start to get crazy... And just when you think you're done, you gotta take Rattly the snake through some Zingers and spike pits.

One more battle against Kaptain K. Rool before you'll finally get some respect from Cranky Kong... 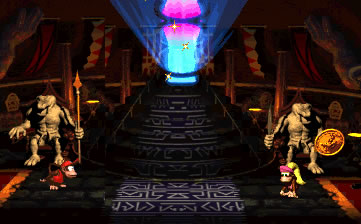 I truly had an amazing time conquering the Lost World in Donkey Kong Country 2, and enjoyed seeing the game's real ending for the first time in two decades... That was back when games were games.